Home / About Us / Areas We Serve / Springboro

Did you know that Springboro, OH was a stop on the Underground Railroad and played a fairly large role in helping escaping slaves hide in the North?

During the 1960s, Springboro’s population grew rapidly, and many new houses were built to accommodate this. It remains one of the area’s most important suburbs due to its location between Cincinnati and Dayton.

When residents of Springboro need roofing services, they turn to the team at American Way Exteriors. We are a veteran-owned roofing contractor with a staff that has more than a century’s worth of combined roofing experience. Since nothing but the very best will suffice for your roof, we always provide the very best in both residential and commercial roofing.

In addition, we are available to help 24/7 in emergency roofing situations, including storm damage. Just give us a call and let us know what you need. We’ll start with a free estimate!

We offer various roofing materials so you have a variety of options to choose from, including:

Springboro homeowners can rest easy with the expert roofing services of American Way Exteriors. See our financing options and read what our customers have to say about us. We are here to help you complete your roofing project with a stress-free experience you will be 100% satisfied with. 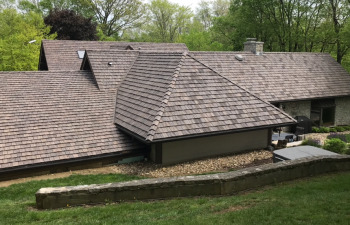 A Springboro homeowner had spent more than a year talking to different roofing contractors, trying to find the right replacement for their old shake roof…

With a host of siding styles and colors, you can choose the right design options to match your home’s style. Get ideas for your next project in our gallery.